Welcome to The Landis Taipei Hotel 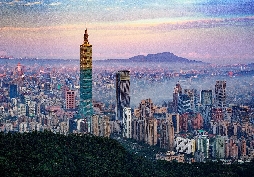 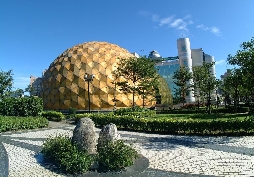 Hsing Tian Kong is a popular temple in Zhongshan District, Taipei, Taiwan. This temple is devoted to Guan Yu, the patron god of businessmen, and is relatively recent in origin. This temple is situated on a street corner near the center of the city. Sculptures of dragons feature prominently in this temple's design. It covers over 7,000 square meters.

The monument, surrounded by a park, stands at the east end of Memorial Hall Square. The structure is framed on the north and south by the National Theater and National Concert Hall.

Taipei 101 and formerly known as the Taipei World Financial Center – is a landmark supertall skyscraper in Xinyi District, Taipei, taiwan. The building was officially classified as the world's tallest in 2004, and remained such until the completion of Burj Khalifa in Dubai in 2009. In 2011, the building was awarded the LEED platinum certification, the highest award according to the Leadership in Energy and Environmental Design (LEED) rating system, and became the tallest and largest green building in the world.

Construction on the 101-story tower started in 1999 and finished in 2004. The tower has served as an icon of modern Taiwan ever since its opening. The building was architecturally created as a symbol of the evolution of technology and Asian tradition. Its postmodernist approach to style incorporates traditional design elements and gives them modern treatments. The tower is designed to withstand typhoons and earthquakes. A multi-level shopping mall adjoining the tower houses hundreds of stores, restaurants and clubs. Fireworks launched from Taipei 101 feature prominently in international New Year's Eve broadcasts and the structure appears frequently in travel literature and international media.

Taipei 101 is primarily owned by pan-government share holders. The name originally planned for the building, Taipei World Financial Center, until 2003, was derived from the name of the owner. The original name in Chinese was literally Taipei International Financial Center . 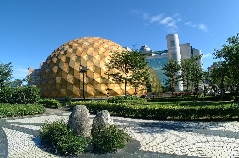 The Taipei Astronomical Museum is a museum in Shilin District, Taipei, Taiwan.

The museum took over the responsibilities of the Taipei City Observatory.The dome at the museum consists of geometrically identical pieces.

Taipei Fine Art Museum opened on December 24, 1983. Located in Yuanshan, It is the first museum of modern art in Taiwan. The main tasks of the museum are to organize exhibitions and to collect valuable works at home and abroad. The museum also makes efforts to exchange art views and works with international art museums. The museum has special designs and the scenery near the museum is also very beautiful.

The art museum holds regular exhibitions and works with schools to introduce art works to the students. The virtual reality art museum provides a 3D interactive environment for museum-goers. The MOD system provides a digital random system by which visitors can choose DVD and tapes to watch.